Scarlett Johansson began her career in acting when she appeared in the movie North in 1994. Since that year, her career has been improving as she got Oscar recognition and appeared in many blockbuster successes. Her breakthrough movie was Ghost World in 2001. Moreover, when she was 17 years old, she played in the movie Lost in Translation, with her performance stirring the audience and critics. She has starred in many roles, from saving the world with the MCU’s Avengers to becoming a tech-obsessed man’s object in Her. In addition, she proved to be more than just a pretty face in many of her movies during her 25 years in the industry.

Scarlett Johansson is one of the most accomplished actors of her time, courtesy of her great performances in amazing movies. She impressed the viewers and critics a lot in the 2000s before proving herself as a huge star in the 2010s. It is a difficult task to pick the best movies of her illustrious career because of her astonishing resume. She appeared in hilarious comedies, superhero blockbusters, emotional dramas, voice acting, and many more genres. Here are the best Scarlett Johansson movies of all time.

Scarlett Johansson has been playing in the Marvel Cinematic Universe since the start when she portrayed the role of Natasha Romanoff in Iron Man 2, which was the third Marvel movie. Moreover, she helped build the groupwork for The Avengers, one of the most successful film franchises in the world. Natasha established a connection between the future super team and S.H.I.E.L.D. Then, she continued to be a bridge between all the members.

Although many believe introducing her solo movie earlier would have been a great idea, the fact that Black Widow is Natasha’s goodbye gives a sense of gravitas to the movie. This is one of the best Scarlett Johansson movies of all time. It gives a background to the character and introduces a great successor for her role, her sister. Although Natasha has always been a supporting character, in the movie Black Widow, she proved that she doesn’t need to be a supporting character to anyone with the depth of her performance. Like the actor herself, she is nobody’s sidekick.

Scarlett Johansson got her second Academy Award nomination in 2019 for her amazing portrayal of Nicole Barber in the movie Marriage Story. She was a teen movie actress who went to New York for theatre, seeking credibility. She meets Charlie, played by Adam Driver, and marries him. Charlie was a theatre director, and Nicole soon started to feel that she had given up everything for her husband’s dream. His dream did not include her and their son Henry. Therefore, she decides to divorce him and the movie Marriage Story is actually the story of that. Johansson plays the role of Nicole in a moving way and that is why she got her fourth BAFTA nomination for her performance. Moreover, she got her fifth Golden Globe nomination and her third SAG Award nomination. 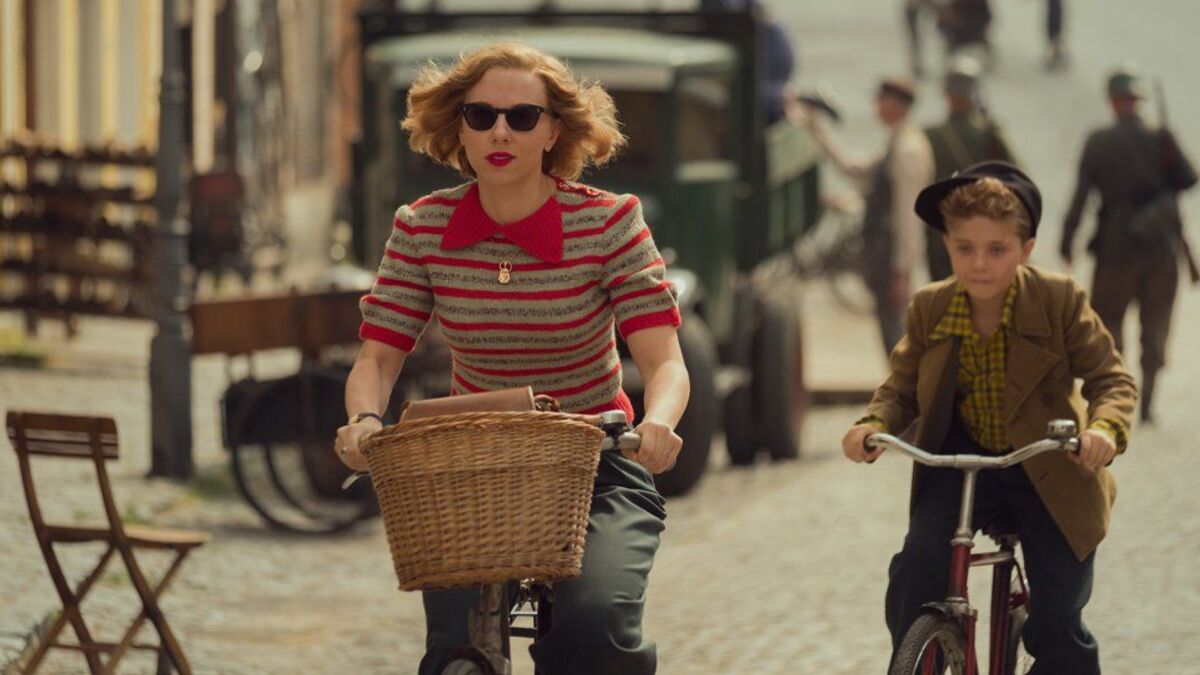 Another one of the best Scarlett Johansson movies ever is JoJo rabbit, directed by Taika Waititi. The story takes place in the final months of Nazi Germany, and for her character in the movie, Johansson received one of her two academy nominations in 2019. She played the role of Rosie, who is the mother of Johannes, played by Roman Griffin Davis. His nickname is JoJo Rabbit for his Nazi peers, and at first, it appears as though he is exclusively maternal. However, Johansson reveals through time that her character has a secret. Moreover, she layers her character so well that when we find out she works against the Nazi regime, it makes a lot of sense. For her perfect display in the movie, Johansson got her third BAFTA nomination, her first individual SAG Award nomination, and her first SAG Ensemble Award nomination.

Scarlett Johansson’s character in the Coen Brother’s movie Hail, Caesar was hilarious. The movie is set in the 1950s, and Johansson plays the role of DeeAnna Moran, who is an Esther Williams-type aquatic movie star. She is pregnant out of wedlock and her image might get ruined as a result of that. In addition, her popular movies could get tanked. Johansson is able to give America’s Sweetheart a funny Brooklyn accent, even when she is popping her gum and smoking. She played a very different role in the movie, further proving her talent and diversity when it comes to playing different roles.

One of the best Scarlett Johansson movies of all time is Lucy. The movie follows the tale of a woman named Lucy, portrayed by Scarlett Johansson, who is pumped with a drug which leads to her gaining psychokinetic abilities. To understand the process she is going through, she asks help from Morgan Freeman, who is a neurologist, to guide her. She is torn between getting the drug out of her body and using it to track down the people responsible and bring them to justice. Although the movie got mixed reviews, the actors were praised for their outstanding performances.

Scarlett Johansson faced one of the biggest acting challenges of her career when she featured in Spike Jonze’s science-fiction movie. For an actor who is known for the use of her gestures and facial expressions, Johansson was not able to use those skills as Samantha. She was the disembodied voice of an artificial intelligence program that Theodor Twombly, played by Joaquin Phoenix, used. Theodore perceives Samantha’s voice as seductive and starts to fall in love with her as if she is a real human being. Johansson is able to remarkably be sympathetic in her voice as well as suggesting that this A.I. system might have an additional motive at work. Johansson showed another great aspect of her many talents in this voice acting. The movie Her is indeed one of the best Scarlett Johansson films ever.

The most unusual movie Scarlett Johansson has played in would be Jonathan Glazer’s sci-fi. Johansson plays the role of Laura, the only character that is seen in the whole movie. She is an alien who makes his way through some men in Scotland, killing many of them. Her character is expressionless for most of the parts and she calmly checks the human species. Johansson takes a courageous approach to the role since she mostly relies on using her facial expressiveness in her movies. Her performance is mostly wordless when she comes to Earth to harvest the unwitting men’s souls. Under the Skin is one of the best Scarlett Johansson movies of all time.

Scarlett Johansson had her third collaboration with Woody Allen in the movie Vicky Cristina Barcelona, which won the Golden Globe award. Johansson portrays the role of a tourist whose name is Cristina. Moreover, she is traveling in Spain with Vicky, her friend. The two are then approached by Juan Antonio, a suave artist who wants to seduce them despite being attached to his ex-wife Maria Elena, portrayed by Penelope Cruz. When Vicky gets engaged, Cristina goes to live with Juan Antonio and Maria. This Allen movie is among the best Scarlett Johansson films of all time.

The movie The Other Boleyn Girl is an adaptation of Philippa Gregory’s novel, which had Natalie Portman and Scarlett Johansson, a dream casting. It is the story of two sister who were rivals from a young age. Portman performs as Anne, and Johansson as Mary. The two compete to win the love of King Henry VIII. In their competition, Mary is able to win his heart and gets married to him, becoming the queen. However, things take a turn and it becomes so entertaining. This is indeed one of the best Scarlett Johansson movies of all time. Make sure to add this to your watchlist if you are into historical movies.

Scarlett Johansson received her third Golden Globe nomination for her portrayal in Woody Allen’s thriller, which is set in London. Chris Wilton, portrayed by Jonathan Rhys Meyers, coaches Tom Hewett, played by Matthew Goode, to play tennis. Wilton gets introduced to Tom’s fiancée Nola Rice, who is played by Scarlett Johansson. Moreover, her character is an actress who is struggling. Chris and Nora start an affair, notwithstanding the fact that he has been going out with Tom’s sister for a while. Kate Winslet was going to play the role of Nola, but she had to drop out. Then, Johansson became her replacement, and she went on to display one of her most acclaimed movies of all time.

Lost in Translation got Scarlett Johansson her highest critical accolades up to now. The story is about two Americans in Tokyo, with their relationship growing. Bob Harris, played by Bill Murray, goes to Tokyo to shoot a commercial. He stays at the same hotel Charlotte is staying at. Johansson plays the role of Charlotte, who is a young woman whose husband usually goes away for photography. They meet in the hotel and start a friendship. Then, they begin talking about the frustration they are dealing with in their lives. Johansson won her first BAFTA Award after this movie. Moreover, she received her first Golden Globe nomination for Lost in Translation by Sofia Coppola.

Girl with a Pearl Earring 2003

Often known as one of the best Scarlett Johansson movies of all time, The Girl with a Pearl Earring is inspired by a novel that is based on the famous painting by Dutch artist Johannes Vermeer of the same name. Johansson plays the role of Griet, who is a maid in Vermeer’s house while he was painting Girl with a Pearl Earring 1665 in Holland. The movie focuses on the events that made the artist choose Griet as his subject. The duo’s relationship affects their life. Moreover, Johansson earned a lot of praise for perfectly balancing the feelings of fear, ignorance, curiosity, and lust. In addition, the movie received ten British Academy Film Awards nominations, three Academy Award nominations, as well as two Golden Globe Awards nominations. Johansson also got a BAFTA and a Golden Globe nomination.

At the age of 16, Johansson appeared in Terry Zwigoff’s comedy movie and made it one of the best Scarlett Johansson movies of all time. Enid and Rebecca, played by Thora Birch and Scarlett Johansson, respectively, are two best friends who come across a scary dilemma. The two are social outcasts; therefore, they plan to room together. However, they later realize that they have to find their own ways. Enid spends her time with Seymour, who is an older man, while Rebecca chooses a more conventional path. Then, they come to a point where they see their friendship pulling apart as a result of those choices. Although the movie didn’t become a hit at the box office, critics within the industry praised Ghost World.