One of the most versatile and lovable actors of this generation is Jesse Eisenberg and many think he is underrated. This hilarious and talented got an Oscar nomination for his role in the movie The Social Network. TechTrends decided to make a list of the best Jesse Eisenberg movies of all time.

Jesse Eisenberg is a talented actor, writer, playwright, and director. He made his movie debut more than two decades ago when he appeared as a teenager in the TV series Get Real. Since then, he has appeared in many movies and genres, from drama to action to comedy. He showcases his talent and intelligence in playing smart and sarcastic roles. Not only has Eisenberg played in box office franchises such as Batman V Superman: Dawn of Justice, but he also appeared in smaller projects that might be more challenging, like The Art of Self-Defense. To honor his wide range of filmography, TechTrends made a list of the best must-see Jesse Eisenberg performances that are ranked based on their ratings on Rotten Tomatoes and IMDb. Without further ado, let’s dive into the list.

Known as one of the rare actors in Hollywood, Jesse Eisenberg can make a movie watchable just by making an appearance. He has immense qualities in a wide range of movies which is considered a great achievement for someone his age. Having a groovy body language and soothing screen presence are among his qualities, which he uses in such a skillful manner. Here are the best Jesse Eisenberg movies of all time.

One of the best Jesse Eisenberg films of all time is Now You See Me, which revolves around an F.B.I Agent who is looking for a team of illusionists. The magical group can pull off big bank heists in their shows and give the money to the audience. Eisenberg appeared alongside a mind-blowing cast, with Mark Ruffalo, Woody Harrelson, Isla Fisher, Dave Franco, Morgan Freeman, and Michael Caine also shining in this crime thriller. The Four Horsemen are really skilled tacticians and magicians that are several steps ahead of the audience in tricking them.

Another one of the best Jesse Eisenberg movies of all time is Zombieland: Double Tap, which came after ten years of the first movie. The movie is pretty much the same, but the plot is a little different, and there are some new jokes. However, the cast is the same, as well as the same director. Eisenberg showcases his talent as a comedy actor in the movie. Although many believe the first movie was better than this one, it is still watchable.

Jesse Eisenberg shows an unexpectedly skillful touch for this genre of movie in Woody Allen’s Café Society in 2016, which is set in 1930s Hollywood. Eisenberg plays alongside her Adventureland co-star Kristen Stewart as Bobby. He is a Jewish nerd who goes to Hollywood, and with his uncle’s help, he tries to work his way up in the movie industry. He falls in love with Stewart’s character Vonnie, who is his Uncle Phil’s secretary. She has a secret affair with her boss. The two actors play delightfully great together once again. This is indeed one of the best Jesse Eisenberg films ever.

Jesse Eisenberg and Imogen Poots play the role of Tom and Gemma, who are looking for the perfect home. It is then when they are introduced to No. 9. While they are hoping to find the perfect place to live, they travel to a suburban neighborhood, where all the houses look the same. They are both happy and fearful of settling down into a life of suburbia. Eisenberg was able to give a wonderfully restrained performance alongside other amazing casts. Vivarium is one of the best Jesse Eisenberg movies ever.

Another one of the best Jesse Eisenberg movies of all time is where he appears as the lead voice, Blu, in the animated film Rio. The story revolves around the adventure of two macaws. Blu is a domesticated one who gets taken away from his people with another macaw named Jewel (Anne Hathaway). The film is very funny and is even engaging for adults. It is a great family movie, but no one will judge you if you watch it alone. We strongly recommend it, especially if you are an animated movie fan. 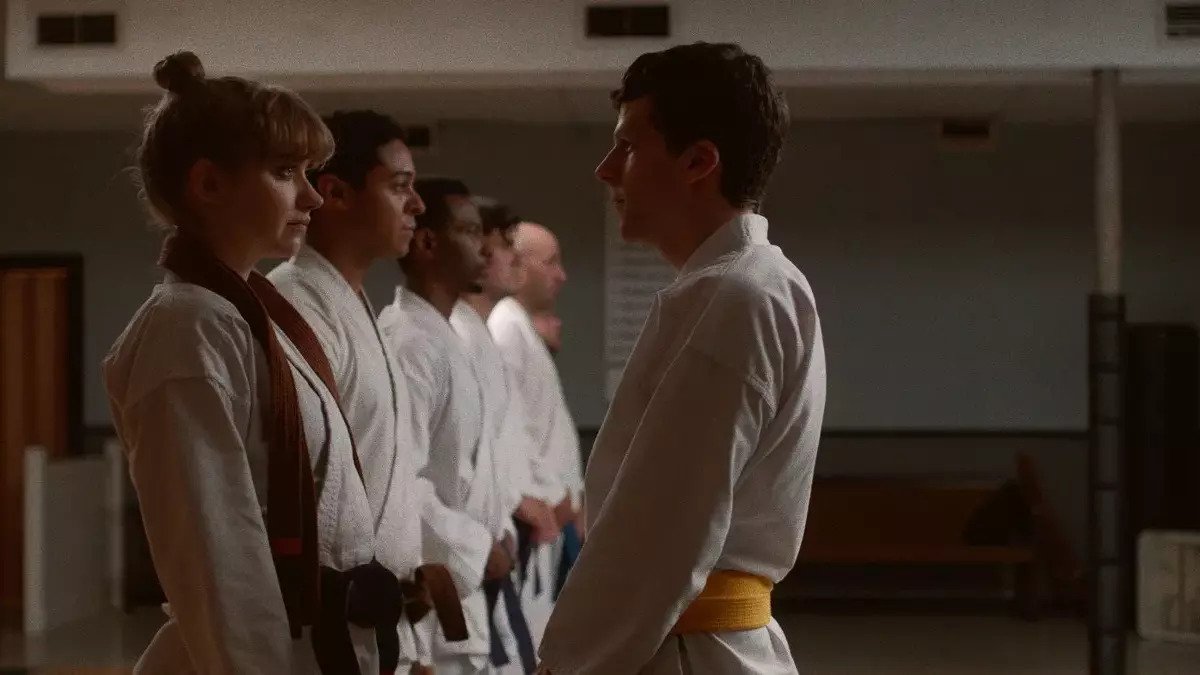 The Art of Self-Defense is the story of a young man who is struggling with the effects of being attacked on the street. Jesse Eisenberg plays the leading role, and he enlists a local dojo and a sensei to teach him how to self-defense. The film is funny, quirky, and everything you want from Eisenberg. However, be ready for a story of masculinity and violence, as well as an internal journey. This is one of the best Jesse Eisenberg movies of all time.

This psychological thriller is about a nerd worker who is struggling with his gregarious doppelganger. There is also humor in the film, and it is visually striking. Moreover, it focuses on some interesting ideas regarding loneliness and identity. Eisenberg does an incredible job of playing two completely different characters with ease and professionalism. Just looking at how effortlessly he does it proves to us what an amazing actor he is. The Double is indeed among the best Jesse Eisenberg movies of all time.

Night Moves is a movie that stars Jesse Eisenberg as an ethically torn young farm worker, who wants to make a difference. However, he is eager to do something profound and make his mark on society. He is keen on standing up for what he believes in. together with Dakota Fanning’s character and a former Marine, Jesse Eisenberg’s Josh, the Oregon environmentalist decide to blow up a hydroelectric dam. This is also included on our list of the best Jesse Eisenberg movies of all time.

Another one of the best Jesse Eisenberg movies of all time is Roger Dodger, which is a comedy-drama. The story follows the life of a man who breaks up with his lover, who is also his boss. He then takes his nephew, played by Jesse Eisenberg, out of town in order for them to meet some women. The movie also features Isabella Rossellini, so you do not want to miss it. Also, it is fun to see Eisenberg pick up ladies with his uncle. Roger Dodger is funny and quirky and shows Eisenberg in his early stages of becoming an actor.

Another one of the Jesse Eisenberg movies of all time is Greg Mottola’s underrated coming-of-age story about a college graduate that finds love working at an amusement park. Adventureland is a comedy about summertime park workers in 1987. Recent college graduate James Brennan, played by Jesse Eisenberg, is keen on having his long-anticipated trip to Europe. However, things take a turn, and he ends up taking a job at the local amusement park. Jesse pairs up with Kristen Stewart, who plays the role of Jesse’s love interest while also having an affair with Ryan Reynolds’ Character. He played Fun Zone’s good-looking maintenance man. Eisenberg meets amazing

For this variation of the zombie apocalypse, Jesse Eisenberg, playing Columbus, finds himself in a world of flesh-eating zombies, doing all he can to get from the college dorm to his hometown to check on his parents. He has a number of rules that keep him alive. Then, he meets Tallahassee, portrayed by Woody Harrelson, and the two decide to go together. However, when they stop at a grocery store, two sisters, Wichita and Little Rock, featured by Emma Stone and Abigail Breslin, respectively, con them out of their car and weapons. Nevertheless, they meet again and suggest a truce, heading to LA hoping to find shelter. Zombieland has smart writing, and its hilarious effects make it a must-watch. This is also one of the best Jesse Eisenberg movies of all time.

This drama movie revolves around the story of an interview between a reporter named David Lipsky, played by Jesse Eisenberg, from Rolling Stone and novelist David Foster Wallace, portrayed by Jason Segel. The story is true, and it happened in 1996 after the novel Infinite Jest came out. If you are interested in a biography drama, this is highly recommended. The two actors do an incredible job of portraying these two characters. The End of the Tour’s reporter Lipsky is one of Jesse Eisenberg’s greatest movie roles.

The Squid and the Whale featured Owen Kline, Jeff Daniels, Laura Linney, and Jesse Eisenberg. The four are part of a family, and the two children have to cope with the fact that their parents will divorce. The story takes place in the 1980s in Brooklyn. The story is comedic, relatable, and wholesome. The two siblings see their family fall apart, and Jesse Eisenberg appears as Walt, the oldest son in the family. He portrays the immature character skillfully amazing. The Squid and the Whale is indeed one of the best Jesse Eisenberg movies of all time.

This revolutionary drama, The Social Network, showcases Jesse Eisenberg’s talent in playing the real-life role of Facebook founder Mark Zuckerberg along with his co-founder Eduardo Saverin, played by Andrew Garfield. The duo’s relationship is one of the main aspects of the movie, and Garfield and Eisenberg were the perfect actors to display the complexity and difficulties the two partners shared. In addition, the dialogues are great, and the narrative is captivating, making it hard to think that The Social Network is according to facts. This is one of the greatest and best Jesse Eisenberg movies of all time and is the first on our list.