Since she is a delight in every film she plays, TechTrends made a list of the best Anna Kendrick movies of all time. During the past few years, she has become one of the most well-known and brightest stars in Hollywood.

Anna Kendrick has appeared in comedies, dramas, and musicals since the 2000s and has made a name for herself as one of the most versatile actresses in Hollywood. She is a talented actress, and her rose to fame came when she was part of the cast of Twilight Saga in 2008. However, she distanced herself from the franchise ever since that time. Kendrick built an impressive career in the movie industry as she appeared in many successful movies, such as Pitch Perfect, Scott Pilgrim vs. the World, and Up in the Air. To celebrate her successful career, TechTrends decided to make a list of the best must-see Anna Kendrick performances based on the movies’ ratings on IMDb and Rotten Tomatoes.

American actress and singer Anna Kendrick started his career as a child actor in theater productions. She had her movie debut in 2003 when she appeared in Camp, directed by Todd Graff. Then, she rose to fame in the Twilight movie in 2008. Her remarkable singing voice helped her become even more successful and famous when she played in the Pitch Perfect franchise.

Although many critics did not name The Accountant their favorite, this action/thriller movie was accepted greatly among audiences. In addition, many insisted that it was the most exciting and one of the best Anna Kendrick movies of all time. The story focuses on accountant Christian Wolff, played by Ben Affleck, and his dealing with big financial corporations has attracted the attention of the FBI. Affleck portrays the role amazingly well as he goes beyond what a leading man in the movie was expected to do and adds another layer of depth to the character. Kendrick plays the role of Dana Cummings, who is an in-house accountant for Living Robotics. Moreover, you will sit at the edge of your seat throughout the film. Don’t miss it.

Another one of the best Anna Kendrick films ever is Happy Christmas, where Kendrick plays the role of Jenny. She is a 20-something irresponsible girl who comes to Chicago to move in with her brother Jeff, played by Joe Swanberg, and his wife Kelly, portrayed by Melanie Lynskey. Her personality gets in the way of the couple’s quiet and cozy home. Jenny and her friend Carson, played by Dunham, want to do a makeover on Kelly’s life, even if she doesn’t approve of it.

Trolls World Tour came after the 2016 Trolls film, and it was a highly-anticipated one where Justin Timberlake and Anna Kendrick are the voice behind Branch and Poppy, respectively. However, the movie revolves around music. Kendrick continues the story of Poppy and how she works with Branch to meet other trolls and bring them together to go against the hard rock-playing Queen Barb, who is keen on eradicating the other genres in music. This is among the best Anna Kendrick movies ever.

In 2016, Anna Kendrick became the voice behind Poppy, a young troll, in the movie Trolls. Poppy is keen on celebrating her kind’s escape from the evil Bergens and it is their 20th anniversary. Although other trolls warn her that throwing a party may get the attention of the giant troll-eating creatures, she does not listen and plans the party anyway. However, just like her friends mentioned, the party gets noticed. Kendrick is the voice behind Poppy, while other amazing actors, including Justin Timberlake, Zooey Deschanel, James Corden, Gwen Stefani, and Russell Brand, back her up. Following this movie and its success, there came a sequel called Trolls World Tour, which was mentioned above.

Beca, played by Anna Kendrick, goes to Barden University, and although college life is supposed to be fun, she has her reservations. She was hoping to skip school and become a music producer in Los Angeles. However, her father, who is a professor, had another idea for her future. Beca then becomes entangled with a cappella group and showcases her amazing vocals. She then continued to appear in the next two movies of Pitch Perfect in 2015 and 2017 as Beca. Pitch Perfect is indeed one of the best Anna Kendrick movies of all time, which brought her further success and fame.

Although Scott Pilgrim, played by Michael Cera, is able to attract the ladies with his abilities in playing the guitar and being the bass guitarist of a garage-rock band, he finds himself getting the attention of ex-boyfriends’ revenge, too. He falls for Ramona Flowers, portrayed by Mary Elizabeth Winstead, and has to go against guys he is not prepared for. Anna Kendrick plays the role of Stacey, who is Scott’s younger sister. The movie was quite a success and became one of the best Anna Kendrick films of all time, despite her having a supporting role.

Drinking Buddies is yet another one of the best Anna Kendrick movies of all time, where she stars opposite Olivia Wilde, Ron Livingston, and Jake Johnson in this comedy drama. The movie is set in Chicago, and it revolves around two colleagues, Kate and Luke, portrayed by Wilde and Johnson. The two have great chemistry, but they each have their own relationships with Chris and Jill, played by Livingston and Kendrick. When they go on a weekend trip, Jill and Chris kiss, and one thing lead to another. We strongly recommend this comedy from director Joe Swanberg.

Rocket Science follows the story of a 15-year-old New Jersey boy called Hal, who wants to join his school’s debate team, notwithstanding having a stuttering problem. He then falls in love with the competitive star of the team, and their lives get more complicated. Reece Thompson plays the role of Hal, while Anna Kendrick portrays Ginny, his love interest. The movie was praised by critics for its realness. Therefore, this is one of the best Anna Kendrick movies of all time. 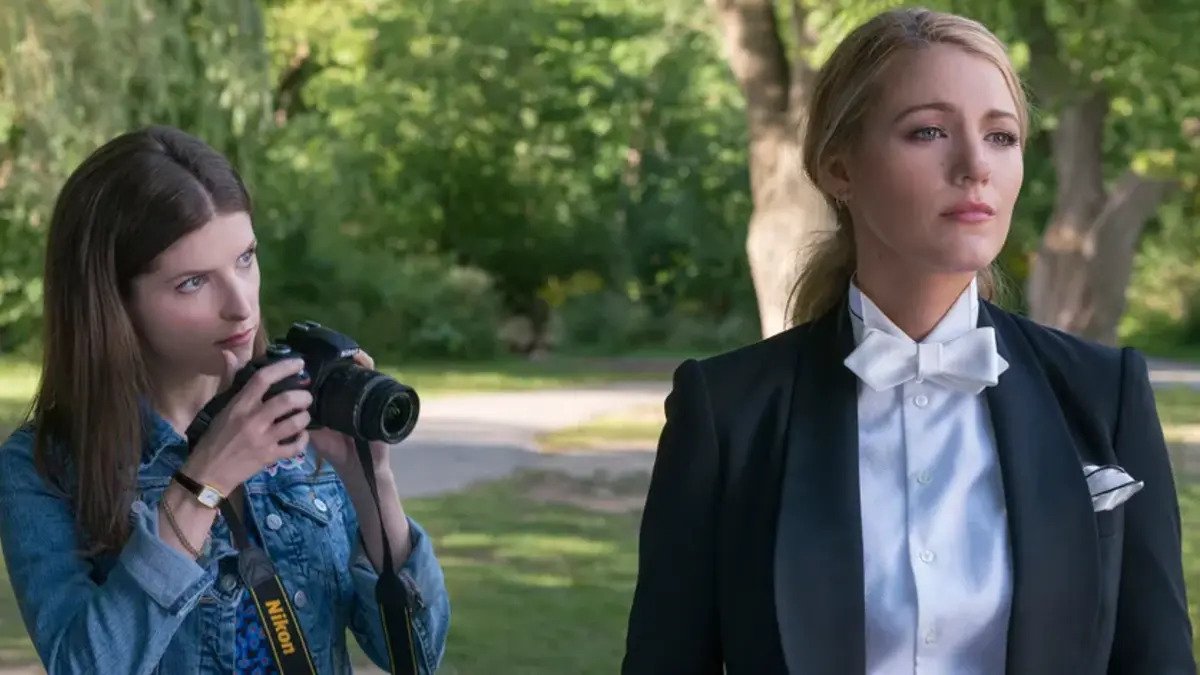 The movie A Simple Favor is an adaptation of the novel of the same name by Darcey Bell, where Anna Kendrick portrays the role of Stephanie. She is a mom and vlogger in a small town, and she becomes friends with Emily, played by Blake Lively. When the glamorous Emily goes missing, Stephanie does her best to solve the case and goes into the world of mystery and crime. However, that world is way over her head. Then, Emily’s drowned body is found, and Stephanie goes and finds her history of Emily and what happened in her life. She finds some secrets from her past, and the story becomes so engaging and entertaining. A Simple Favor is among the best Anna Kendrick movies of all time.

The next one on the list of the best Anna Kendrick movies of all time is End of Watch, which is about two police officers that work in Los Angeles. The movie focuses on their daily aspects of the lives, such as their friendship, relationships, and long day at work. The leading characters are Jake Gyllenhaal and Michael Pena; Anna Kendrick plays the role of Janet Taylor, and one of the officers ends up marrying her. Many critics and the audience applauded the emotion of the drama.

ParaNorman is an animation movie that received a round of applause from critics who admired the interesting script of the film. The story revolves around an 11-year-old, Norman Babcock. He has a unique talent that lets him communicate with dead people. When his uncle tells him that there is going to be a witch curse befalling his town, he does his best to stop the zombies who are on the verge of running free. Anna Kendrick is the voice behind cheerleader Courtney Babcock, who is Norman’s sister and is in high school. ParaNorman is indeed one of the best Anna Kendrick movies of all time.

The second one on the list of the best Anna Kendrick movies of all time is Up in the Air, which tells the tale of a young employee who works at a human resources consultancy firm. In order to show how important it is to fire someone face-to-face, Ryan Bingham, played by George Clooney, takes the employee with him. When he falls for a woman he meets, however, he starts to reconsider his hard ways. Anna Kendrick plays the role of Vera Farmiga, who is Clooney’s love interest. The two actors have charisma, humor, and a lot of emotion which attracts the audience.

Another one of the best Anna Kendrick movies of all time is 50/50, where Adam Lerner, played by Joseph Gordon-Levitt, is diagnosed with malignant tumors on his spine, and his chance to survive is 50/50. Seth Rogen portrays the role of his best friend Kyle, and Anna Kendrick performs as his therapist, Katherine. Although Adam and Katherine’s meeting is very professional at first, they start to feel for one another and start a romantic relationship. The movie was praised by the audience and the critics and we strongly recommend this comedy-drama.

Japan has many top bike producers and Yamaha is one of them, manufacturing different kinds of bikes. This text is on the best Yamaha motorcycles of 2022.

Best Harley Davidson Bikes of 2022; Bad to the Bone!

Best Kawasaki Motorcycles of 2022; Be Fast